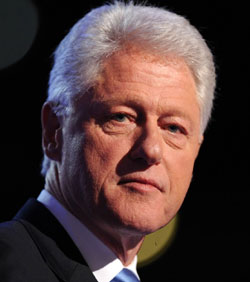 By Emmanuel Aziken, Political Editor
Former United States President Bill Clinton has wished Nigeria well ahead of tomorrow’s presidential and National Assembly elections
President Clinton who was supposed to visit the country to superintend Wednesday’s peace pact signing ceremony between the two leading candidates, President Muhammadu Buhari of the All Progressives Congress, APC and the Peoples Democratic Party, PDP candidate, Atiku Abubakar.
He, however, stepped aside from the visit following mutterings here and there in Nigeria that the visit could be politically misconstrued.
Clinton, however, followed up by putting through a telephone call to President Buhari during which he wished Nigeria well, a statement from the presidential villa disclosed.
A statement issued by Femi Adesina, Special Adviser on Media and Publicity, released on Thursday, observed President Clinton’s continuous support for the growth of democracy in Nigeria despite the fact that he was unable to make it for the final signing of the peace accord between the two major candidates.
Mr. Adesina said that Buhari on his part commended Clinton for his constant support for the peace and progress of Nigeria under a democratic era. He described the US president as a friend of Nigeria.
“President Buhari assured Clinton of his commitment to free, fair and credible elections in the weeks ahead.
“President Clinton, who regretted his inability to visit the country to witness the signing of the final peace accord before the general elections, wished Nigeria well as her citizens go to the polls.”