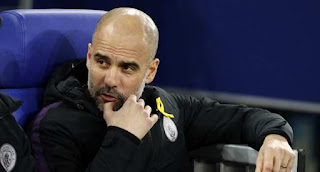 Manchester City manager, Pep Guardiola has reacted to his side’s Champions League quarter-finals draw with Tottenham Hotspur.
DAILY POST recalls that Man City were drawn alongside Tottenham when the draw for quarter-finals took place in Nyon on Friday.
Guardiola said Man City and Tottenham know each other very well, adding that he has a lot of respect for Mauricio Pochettino’s men.
“We know each other quite well,” Guardiola was quoted by Manchester Evening News as saying in his pre-match press conference on Friday ahead Man City’s FA Cup quarter-final clash with Swansea City this weekend.
“We play each other many times. I have a lot of respect for them. I know quite well the quality of this team. We will try to arrive in the best condition possible. It is a pleasure to be in the Champions League quarter-finals.”
Guardiola added: “Any team has their strong points and weak points. We are strong in some areas and weak in other ones.
“It is what it is. It is what it is. Never in my life do I imagine something better, what I want is for people to come back from the international break fit.”