U.S. to deny visas to anyone involved in ICC investigations against U.S. personnel 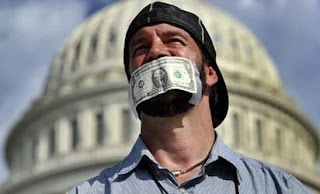 Washington – The United States will deny visas to any individual involved in initiating investigations or prosecutions against U.S. personnel at the International Criminal Court (ICC), Secretary of State Mike Pompeo announced on Friday.
A protester covers his mouth with a dollar bill as he joins others in a demonstration in front of the US Capitol in Washington, DC, on October 1, 2013 urging congress to pass the budget bill. US President Obama slammed Republicans for shutting down the government as part of an “ideological crusade” designed to kill his signature health care law. The US government shut down on October 1, 2013 for the first time in 17 years after a gridlocked Congress failed to reach a federal budget deal amid bitter brinkmanship. Some 800,000 federal workers have been furloughed in a move reminiscent of two previous shutdowns — for six days in November 1995 and 21 days from December that year into early 1996. AFP PhotoPompeo said that the goal of the new policy, already being implemented, is to have the ICC change course with regards to the U.S. and its allies, especially Israel.

“Further measures, including economic sanctions, could follow,’’ Pompeo warned.
He appeared to be referring in particular to requests for investigations with regards to U.S. military actions in Afghanistan.
“The ICC is attacking America’s rule of law,’’ Pompeo said, adding that “it is not too late to change course and we urge it to do so immediately”.
Pompeo described the ICC as an organisation that has “broad, unaccountable” powers.
The U.S. top diplomat did not disclose how many people are being affected by the new U.S. sanctions.

James Goldston, the executive director of Open Society Justice Initiative, said the new sanctions would undermine efforts to hold to account those responsible for the worst war crimes.
“Secretary Pompeo’s remarks reflect this Administration’s view that international law matters only when it is aligned with U.S. national interests.
“But that’s not how law works,’’ he said on Twitter.
The ICC came into being in 2002 with over 120 members, including most European nations.
The U.S. is not a party to the ICC, along with other major powers, including Russia and China. (dpa/NAN)