Ouch Very Disappointing: WE DON’T KNOW YOU, COURT TELLS BUHARI CAMPAIGN ORGANIZATION AS IT STRIKES THEM OUT FROM N40 MILLION SUIT AGAINST ATIKU 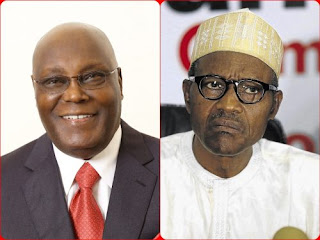 A High Court sitting in the FCT Abuja at Apo has just struck out the name of Buhari Campaign Organization, BCO, from a N40million libel suit which was instituted against the presidential candidate of the Peoples Democratic Party, PDP, Atiku Abubakar.

Atiku was in the suit marked FCT/HC/CV/ 804/2019, accused of defaming President Muhammadu Buhari and his family. While the BCO sued as the 1st Plaintiff, President Buhari was cited as the 2nd Plaintiff in the matter. Specifically, the Plaintiffs, are praying the court to compel the PDP flag-bearer to pay damages for alleging that President Buhari and members of his family own substantial shares in 9mobile and Keystone Bank.

The litigants, in the suit that has Atiku’s aide, Mr. Phrank Shaibu as the 1st Defendant, insisted that the claim was not only false, but highly libelous. They are seeking a declaration that “the 1st Defendant (Phrank Shaibu) on behalf and for the 2nd Defendant (Atiku) neglectfully, unlawfully and recklessly permitted and caused to be published in Newspapers, defamatory and damaging statements against the 1st Plaintiff (President Buhari)”.

However, Justice Binta Mohammed, in a ruling on Tuesday, held that the 1st Plaintiff, BCO, is not known to the law. The court agreed with counsel to the Defendants, Mr. Chukwuma-Machukwu Ume, SAN, that the BCO not being a juristic person, could not sue or be sued. Atiku had in a motion on notice marked M/3117/19, and dated February 11, contended that BCO was not a proper party to seek any relief against him.

He argued that for jurisdiction of the court to be duly activated, parties must be juristic and competent persons known to law. Justice Mohammed upheld Atiku’s argument and held that the BCO is an entity that is unknown to the law. Meantime, in a swift reaction, the Plaintiffs have filed a fresh motion to be allowed to amend the Writ of Summons to replace BCO with the name of Mallam Gidado Ibrahim, as the 2nd defendant.

The Plaintiffs also applied for leave of court ‎to amend the statement of claim and to file witness deposition on oath for the amended process. Atiku’s lawyer however challenged the competence of the motion, contending that it was not assigned a motion number as required by the rules of the court.

The plaintiffs also want an order for “general damages in the sum of (N10,000,000,00) Ten Million Naira only jointly and severally against the Defendants for the embarrassment, pain and unnecessary financial loss suffered by the Plaintiffs most particularly the 1 st Plaintiff who is a public figure, an honourable presidential candidate and reputable gentleman to the core”.

As well as an order of the court “for the payment of the sum of (N375,OOO.OO) Three Hundred and Seventy Five Thousand Naira only being incidental expenses and/or legal charges which the 1 st Plaintiff incurred in respect of this matter”.

In a witness statement on oath made by its Director of Communication and Strategic Planning, Mallam Gidado Ibrahim, the BCO, told the court that Atiku and his media aide engaged in smeared campaign of calumny against Buhari, by willfully allowing and sponsoring the said purported defamatory and image damaging statements made by the 1st Defendant to be published by some newspapers to members of the public.

Ibrahim averred that as such, President Buhari’s reputations was greatly affected by undue diligence with regards to the authenticity of the information as it relate to the true ownership of the alleged companies which the 1 st Defendant on behalf and for the 2nd defendant, falsely published in the newspapers for the consumption of the general public.

In a counter move, Atiku, asked the court to compel President Buhari to pay him damages in the aggregate sum of N2billion, as well as tender a public apology to him, for sponsoring frivolous suits against him. ‎He applied for an order mandating that the N2bn damages should be sent to all the camps of Internally Displaced People, IDPs, across the country and for equipment of libraries and Information Technology ‎equipment for all State Universities in Nigeria.

More so, Atiku, sought for an ‎order, “mandating President Buhari and his agents including security operatives and officers to abide by the rule of law and the principle of separation of powers entrenched in the constitution and should not intervene in the forthcoming elections”. In a 56 paragraphed witness statement on oath deposed to by one Abraham Udoh, the PDP presidential flag-bearer ‎told the court that President Buhari has failed Nigerians by his inability as a President, to stop ruthless and wanton killings across the country.

He said the killings and destructions had rendered citizens, farmers, women and children homeless without food or basic amenities of life, as well as led to the emergence of various IDP camps in the country.

He said: “That under the present administration, there are over 108, 000 Internally Displaced Persons grappling with a litany of infections and hunger”. “In Taraba State the number of IDPs in the various camps are: Mayo Dassa (402 IDPs); Gullong (1259), ATC Kofai (968), Abuja I and II (357), Dorowa/Magami/Malam Joda(579), Sabon Gari (482), Malum (872), Murtai/Yaukani/Yelwa(554), Mile six (74), Nyabukaka/Tutan Kurma/Kasa(148) and Nukkai (30). “That in Plateau State there are a total of 38, 051 Internally Displaced Persons (IDPs) who were victims of the June 23 and 24 violence involving suspected herdsmen and villagers in Barkin Ladi, Riyom, Mangu, Bokkos and Jos South Local Government Areas are taking refuge in 31 camps.

“That in Benue State they have registered more than 180, 000 displaced ‎persons in eight camps while over 500, 000 IDPs are taking shelter wherever they find space. ‎Atiku further informed the court that President Buhari’s “lopsided appointments and insensitivity to the principle of Federal character laid down in section 14 (3) of the 1999 constitution that has led to disunity amongst Nigerians.

“That the current division in Nigeria was ignited by that infamous 5% versus 97% speech that President Buhari gave in Washington on June 23, 2015. No father should ever tell some of his kids in the presence of the rest of his kids that he loves them more than the others. When this happens, the discontent that it will cause may lead to the breakup of that home.

“That in a report by Transparency International (TI) released on February 21, 2018, Nigeria was still ranked as one of the most corrupt countries in the World. That the inability of the Buhari administration to combat grand corruption has led to astronomical plundering of public coffers costing ‎the Nigerian taxpayers around 25% of annual Gross Domestic Product (GDP).

“That according to a recent report released by the International Monetary Fund (IMF) on February 28, 2018, Nigerians are getting poorer despite the country’s slow recovery from a devastating recession”. Atiku further told the court that Buhari’s desecration of the judicial process of the nation, led to a high tension and democratic instability in the country.

“That Buhari in flagrant abuse of his veto power, without any unilateral support from other tiers of government illegally and unconstitutionally suspended the Chief Justice of Nigeria (CJN), Justice Walter Onnoghen from office on January 25, 2019 without strict adherence to the provisions of section 292 of the 1999 constitution which laid down the procedure for the removal of a judicial officer in his capacity.

“That in further usurpation of the Constitutional functions of the National Judicial Council (NJC), Buhari swore in an illegal Acting Chief Justice of Nigeria, Tanko Mohammed”, Atiku added.