Just In: JUST AFTER ATIKU IS ‘DECLARED’ THE GENUINE WINNER OF THE 2019 PRESIDENTIAL ELECTION, COURT RELEASES FINAL JUDGEMENT IN PDP’S FAVOUR 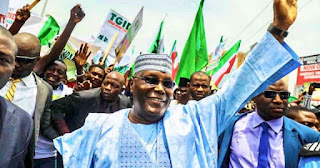 challenging the victory of Gov. Ifeanyi Ugwuanyi as the winner of the March 9 governorship election in the state. This report is

Party (PDP) in the recently concluded general elections, as the “genuine” president of the country.

The petition was reportedly filed by Action Peoples Party (APP) The tribunal, chaired by Justice I. M. Sambo, struck out the

petition after entertaining a motion on notice for the withdrawal of the petition.

process as filed. He prayed the tribunal to strike out the petition, pursuant to Rule 29, Rules of Procedure of Election Petitions.

granting leave to the petitioner/applicant to withdraw the petition in its entirety, and consequential order striking out the

Related image
In her submission, Mrs A.J. Offiah (SAN), counsel to the governor and first respondent, said that they had entered appearance

after being served with the petition. “We concede that we were served with an application for the withdrawal and dismissal of the

Offiah said that they had filed and served the petitioner/applicant, an affidavit against illegal terms of withdrawal, adding that

they were not opposed to the application. The tribunal consequently dismissed and struck out the petition and awarded no cost

Party (PDP) against APC. The suit was filed by a senatorial candidate of the Peoples Democratic Party (PDP) in Bauchi state,

Garba Dahiru. Dahiru had asked the court to declare him the winner of the election in Bauchi South Senatorial District and issue

South senatorial poll is. The Independent National Electoral Commission (INEC) decided to declare the APC the winner of the

election. Results of the February 23 election as announced by INEC showed that the APC garnered 250,725 votes, while Dahiru

scored 175,527 votes. Returning Officer, Ahmed Sarkin-Fagam, said he could not declare a winner for the election because APC

had no candidate recognised by the law. as it had failed to substitute its candidate, Lawal Gumau, as directed earlier by a federal

The judge at the federal high court in Abuja, Taiwo Taiwo, in his ruling on Wednesday, held that it is a post-election matter and

that the court lacked jurisdiction to entertain it. He added that the appropriate court for the matter is the election petition

tribunal. Taiwo said the court could not decide on the candidacy of the APC since it is already a subject before the appellate court.

He added that doing so would merely amount to an academic exercise. Addressing journalists shortly after the judgment, the

INEC lawyer, Alhassan Umar, thanked the court for a well-considered judgement, while Prisca Elesike, who is counsel to Mr

Dahiru, said: “an appeal is a better option.”