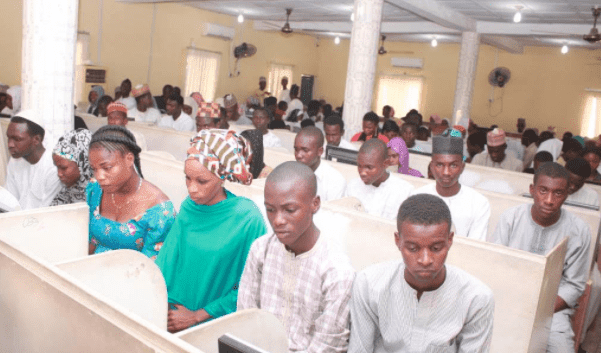 Ends today as 1.9 million candidates take examinations into tertiary institutions
By Joseph Erunke
ABUJA – THE Joint Admissions and Matriculation Board, JAMB,has explained that it was yet to release results of the 2019 Unified Tertiary Matriculation Examination, UTME, scheduled to end today, because they were still undergoing screening.
JAMB has said the examinations taken so far by candidates have been successful even as it said it was looking into cases that emanated during the examinations.
JAMB’s Head of Media,Dr Fabian Benjamin, speaking Tuesday,in Abuja, said the board was also looking into cases involving those who were unable to be verified through its biometric process, adding that a decision reached in respect of it would be released to the public.
The board explained that the screening was informed by the fraudulent activities identified in the ongoing UTME.
The UTME which began last week, Thursday,comes to an end today after a total of 1.8 million candidates took the examination for admissions into higher institutions.
JAMB said a total of 103,173 candidates also registered for the Direct Entry,DE.”
“The figure for the 2019 UTME shows an increase of 233,240 candidates against the number of applications received for the 2018 UTME which was 1,652,998,”the board had revealed in its weekly news bulletin, released last Monday.
“We have to keep screening these results because there are lots of issues we discovered like multiple registrations, impersonation and the likes, so we are still fishing them out.
“Some have been arrested and those yet to be arrested, we have their records, we will fish then out. However, candidates should expect their results very soon,”Dr Benjamin said.
Recall that the board had disclosed that it
uncovered a group of professional examination writers who sit the Unified Tertiary Matriculation Examination ,UTME, for prospective candidates for a fee.
“As a result of the various intelligence gathering mechanisms of the board,over 50 of such professional examination writers have been arrested across the country.
“Some of these fraudsters are Masters Degree certificate holders, postgraduate and undergraduates students of tertiary institutions,”the board had said in its weekly news bulletin released on Monday.
According to JAMB,”These professional writers connived with some Computer Based Test, CBT centre owners to perpetrate this crime through engaging in multiple registrations whereby the fingerprints of the actual candidates and their impersonators are captured side by side.”
“The modus operandi of these UTME syndicates was confirmed when one of the kingpins was apprehended recently,”it had explained.