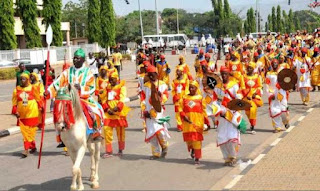 This year’s edition of Abuja Carnival holding from November 23 to 25 will provide a veritable platform to further strengthen the bond of unity of the country after the 2019 general elections.
Permanent Secretary, Federal Ministry of Information and Culture, Deaconess Grace Gekpe, announced this in Abuja yesterday during a stakeholders’ meeting.
She said the carnival with the theme ‘Culture for Peace’ would also provide a platform to unwind, recreate and continue the onerous task of nation building after the “peaceful” general elections.
Gekpe said the ministry was equally exploring the Abuja Carnival as a vehicle for wealth creation, poverty reduction, employment generation and social integration as well as panacea for peaceful and stable society.
“Though diverse in language, tribe, culture and tradition as well as in religious and political philosophy, the carnival is conceived to showcase our strength even in our diversity and to forge a nation of one destiny, one people,” she stated.
She called for inputs from the various stakeholders from the 36 states of the federation and the FCT.
“This way, we will not only sustain the Abuja Carnival but surpass the standard of previous editions,” she said.
Earlier, the Emir of Machina in Yobe State, Alhaji Bashir Albishir Bukar, had stressed the need to diversify the nation’s economy by leveraging on culture and tourism because of their enormous potentials in wealth creation.
Source daily trust