Nigeria today: I’m going slow so that I can survive – Buhari 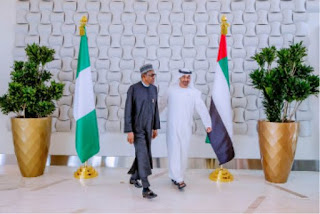 President Muhammadu Buhari meets with Crown Prince of Abu Dhabi H.H. Mohammed Bin Zayed Al Nahyan in Abu Dhabi yesterday.
…We’ll get at $16bn expended on power
President Muhammadu Buhari yesterday in Dubai, said that he was ‘going slow’ because of his experience during the military era.
The president said in his second term, he would be steadfast.
Buhari was responding to a question by one of the Nigerians in the UAE. The president was asked: “What are you doing to bring treasury looters to justice?  Your boss, your subordinates and others. Many are saying the president can only bark, he can’t bite. When are you going to bite like lion?
“I have once ruled this country, some of you know that once upon a time I came in uniform and what I did was to arrest from the president downward. I put them in Kiri-Kiri, and I told them they are guilty until they can prove themselves innocent.
“And you know subsequently what happened- we set up about six tribunals base on the geopolitical zones, and those who were ministers and governors were asked to justify what they have in the banks and physical on the ground, relative to their legitimate earnings.
“There were only two Nigerians then to my knowledge who were found to be very honourable, both of them are dead now: Bilyaminu Usman, a junior minister, from Jigawa State, and Adamu Ciroma, a minister of finance and governor of central bank. They were incredible Nigerians.
“I may be ‘Baba go slow’ but I didn’t loot.  People have to be proven guilty before they are locked up. All that I have to do is to tell the police, and SS that somebody has so many houses, he has so many investment and his salary is this. Recently, the EFCC placed an advert in some of the national newspapers and showed how much was recovered in term of fixed asset and money,” he said.
He said his administration embraced the Treasury Single Account (TSA) policy to have a firm control of the country’s revenue.
Lamenting the money generated during previous administration, Buhari said he would look at the money expended on the power sector during the 16 years of PDP.
“I think one of the leaders of those administrations made a slip tongue by saying that they spent $16bn, not naira on power. But, where is the power and where is the $16bn. Maybe eventually by the end of this term, we will get at it,” he said.
Source daily trust