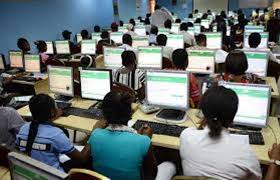 The Joint Admissions and Matriculation Board said on Monday it had not yet released any results of the 2019 Unified Tertiary Matriculation Examination as claimed by some fraudulent websites.
It, however, said the results would be released by the end of this week.
JAMB Head of Information, Dr Fabian Benjamin, stated this in an interview with our correspondent in Abuja.
Benjamin said, “We have not released any results yet. By the grace of God, we can expect that results will be released this week.”
The board had last week noted that the over 1.8 million candidates, who sat for the UTME, would be able to check their results from their mobile phones, adding that candidates should not allow operators of Computer-Based Test centres to exploit them.
The board said the results were undergoing screening for malpractices, after which they would be released and widely publicised.
The 2019 UTME had held between April 11 and April 17 in 698 CBT centres nationwide while over 200 candidates sat for it on April 27 in seven  foreign countries.
“We have simplified the process of checking the results. Candidates will use their phones. They don’t need to go to any cyber café or Internet provider. The full process will be announced to the candidates as soon as the results are released,” Benjamin said in an interview with our correspondent.
Copyright PUNCH.