Breaking: This Is Unfair To JAMB’s Best Candidate 2019 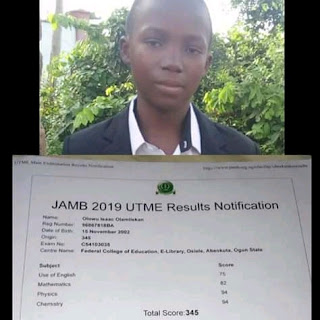 This is Oluwo Isaac Olamilekan, the 3rd overall best candidate in the 2019 Unified Tertiary Matriculations Examination (UTME). He is an indigen of Osun state. A proud son of the soil who has made the state proud as none of such has ever been recorded in the history of Osun State as far as JAMB is concerned.

With all due respect, this 17 year old boy deserves some awards and recognition for his brilliant performance.

Franklin Ekele, who emerged best overall candidate with a total score of 347 was only 2 marks higher than Isaac, and he has already been awarded scholarship and cash gifts by the Lagos state government and private individuals.

But nothing has been done for Isaac who emerged the 3rd overall best Candidate with a total score of 345. According to JAMB, Isaac is at the same time the best overall candidate in the whole of the western zone of Nigeria, including Osun, Oyo, Lagos, Ondo, Ekiti, Ogun and Kwara states. Yet, Kamardeen Ridwan, who had 319 (a score far below Isaac’s) was awarded a scholarship by one APC honorable in Osun state while the actual best student from the state and western region was sidelined.

As concerned individuals, we are calling on the government of Osun State, all western states and other citizens of Nigeria to do the needful for this brilliant little boy who has done the region proud.

Nigerians, let’s speak up for what is right and ensure that Oluwo Isaac Olamilekan gets what he truly deserves.