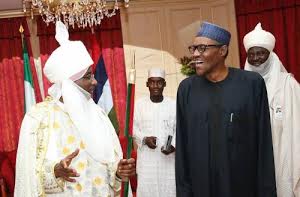 Following the statement made by Muhammad Sanusi II, the Emir of Kano, over unfavourable economic policies leading the country to bankruptcy, the Chartered Institute of Bankers of Nigeria (CIBN) and the Nigeria Employers Consultative Association (NECA) have joined the call for the President Muhammadu Buhari-led federal government to scrap the fuel subsidy regime
On Tuesday, Sanusi, a former governor of the Central Bank of Nigeria, had urged President Muhammadu Buhari to remove the subsidy regime.
In its reaction to the Emir’s call, NECA stated it had always maintained that the fuel subsidy should be scrapped as it is a conduit for corruption.
The Director General of NECA, Mr. Timothy Olawale, stated this to Punch.
Olawale explained: “As far as we are concerned, fuel subsidy is a conduit for corruption. It is a means of enriching certain individuals.
Such money going into fuel subsidy should be channelled into a productive sector of the economy and not consumption.”
The President of CIBN, Dr. Uche Olowu, stated that the Nigerian government must find a way to cushion the effect when subsidy isremoved.
“There will be pain in the short term. But in the long term, they will use the money from that subsidy to upgrade infrastructure that will encourage wealth creation activities, which will increase employment,” he said.
The Lead Director, Centre for Social Justice, CSJ, Mr. Eze Onyekpere, said the continuation of the subsidy would compound the woes of Nigerians.
“Continuing subsidies on petrol will compound our funding crisis. So, I support the Emir of Kano that the fuel subsidy should be removed because it is in line with what we have been talking about.
“We are worried that despite the price of crude oil selling above the benchmark price in the last couple of years, we have hardly met the production target of 2.3 million barrels a day. The recent disclosure that the country produces less than two million barrels a day falls in line with the trajectory of this challenge.
“The dominance of oil in the revenue profile, as well as the relatively meagre revenue expected from the non-oil sector, compounds the revenue challenge. Increasing recurrent expenditure accruing from the increased public minimum wage will imply that we have to partly fund salaries with borrowed money which is not sustainable either in the short, medium or long term,” he said.
The Corporate Affairs Director, Manufacturers Association of Nigeria, Mr. Ambrose Oruche, maintained that the official position of the body remains the stance it took in 2014 when it called for the removal of fuel subsidy.
SOURCE:Sahara reporters