INCREDIBLE:World Bank ranks Nigeria as one of the best places to do business 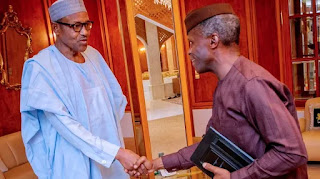 Nigeria has moved up several places on the World Bank’s Ease of Doing Business ranking.
Preesident Buhari and VP Osinbajo have set out to improve doing business in Nigeria (Presidency)

Nigeria has made some progress on the World Bank’s ‘Ease of Doing Business’ ranking for 2020.
The Ease of Doing Business is an index published annually by the World Bank.
It is an aggregate figure that includes different parameters. These parameters indicate how easy or difficult it is to conduct business in a country.
The Ease of Doing Business compares business regulations in 190 countries across the world.
What is Nigeria’s position now?
In the latest index from the World Bank, Nigeria is ranked 131 globally, moving up 15 places from its last ranking.
The World Bank office in the US (World Bank)
Enforcement of contracts entered was a key factor in Nigeria’s ascent on the table. Wide ranging reforms by the federal government was also cited as a significant factor.
According to the Bretton Woods Institution: “Nigeria conducted reforms impacting six indicators, including making the enforcement of contracts easier, which placed the 200-million-person economy among the world’s top improvers.
“Only two Sub-Saharan African economies rank in the top 50 on the ease of doing business rankings while most of the bottom 20 economies in the global rankings are from the region.”
Not so good in Africa
Africa got a few knocks too, no thanks to poor infrastructure, bureaucratic bottlenecks and logistic concerns.
“Compared to other parts of the world, Sub-Saharan Africa still underperforms in several areas. In getting electricity, for example, businesses must pay more than 3,100% percent of income per capita to connect to the grid, compared to just over 400% in the Middle East and North Africa or 272% per cent in Europe and Central Asia.
Buhari inaugurates 2020 Armed Forces Emblem Appeal with N10m donation. [Twitter/@BashirAhmaad]
“When it comes to trading across borders and paying taxes, businesses spend about 96 hours to comply with documentary requirements to import, versus 3.4 hours in OECD high-income economies, and small and medium-sized businesses in their second year of operation need to pay taxes more than 36 times a year, compared to an average of 23 times globally,” the World Bank wrote.
How Nigeria fared in the past
Nigeria was last ranked 146 among 190 economies.
In 2017, Nigeria was ranked 145.
The Ease of Doing Business in Nigeria averaged 145.09 from 2008 to 2018, reaching an all time high of 170 in 2014 and a record low of 120 in 2008.
Nigeria has now jumped 39 places on the ranking since 2016.
The Nigerian presidency operates the Presidential Enabling Business Environment Council (PEBEC) overseen by Vice President Yemi Osinbajo.
PEBEC’s main assignment is to initiate and implement reforms in Nigeria’s business environment and in government processes