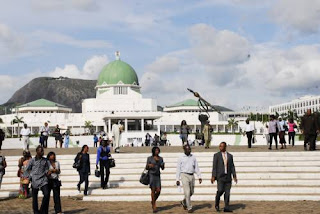 The two weeks declared by the National Assembly for the budget defence by ministries, departments and agencies has exposed the decay in facilities at the country’s top lawmaking complex, SaharaReporters has found.

The exercise, which saw top government officials defending their budget proposals before relevant committees, exposed the inadequate and poor infrastructure at the National Assembly complex.At the moment, the facility battles with insufficient chairs, poor airconditioning systems, stinking toilets and lack of a parking lot.The airconditioning system in some of the committee rooms are not functioning properly, forcing visitors to rely on hand fans to cool their body temperatures, it was discovered. SaharaReporters findings revealed that the central ventilation system that supplies many committee and conference rooms had been faulty for a while.It was gathered that Julius Berger Plc, who had been handling the maintenance service of the facility, pulled out of the deal due to non-payment by the management for about three years.
It was also gathered that since then, the new company that was engaged for that purpose had found it difficult to fix and find solutions to the technical and electrical problems withing new building of the House of Representatives.
A source revealed that all the fittings and accessories used by Julius Berger were imported and became difficult to replace when they got spoilt.
According to the source,  “All the things Julius Berger used were brought from Germany and that is why they have been difficult to replace.” Another glaring flaw is the lack of chairs for guests particularly at the conference room 0.28 and some other committee rooms.
It was a battle of survival during the budget proposals defense as guests, journalists and staff struggled to get seats.  Many of the guests were left with no option than to stand for the duration of the proceeding.Perhaps the most embarrassing aspect of it all is the stench emanating from the toilets located near the House of Representatives Press Center.
The maggot-infested toilet is an eyesore and a health hazard to all. Many visitors also had bitter experiences in parking their cars due to lack of space within the complex.
Many of them improvised by parking by the shoulder of the road, an action that prompted security at the complex to deflate their vehicles tyres.Also, water dispensers installed at different locations within the new building have not been functioning for many years.
It is meant to supply treated drinking water for staff and visitors but have not supplied a drop of water for a long time.
The situation at the House of Representatives wing has since progressed from bad to worse since the beginning of the 9th Assembly.The management responsible for maintenance of facilities at the complex have virtually abandoned that task, according to findings by SaharaReporters, creating crisis in the process.