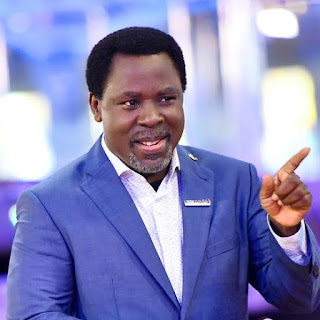 During his church service at The Synagogue, Church Of All Nations (SCOAN) on Sunday 5th January 2020, Prophet TB Joshua released his much-anticipated prophetic message for the year 2020. The eleven words of prophecy touched on a wide range of topics, including messages for Nigeria, Iran, America, Russia and the United Kingdom. This is to proof that Jesus is Lord.

Here are the Prophecy Below:-
After going to the prayer mountain to seek the face of God, Prophet TB Joshua has released his prophetic message for the New Year 2020.
We urge you to watch this prophetic message carefully and prayerfully and be encouraged to draw closer to God in this year of humility, in Jesus’ name.
Here is the written version of the prophetic message:PROPHECY FOR 2020 – PROPHET TB JOSHUAOur prayer warriors are on their knees praying to make sure the changeable ones are changed. Prophecy is a guide to life. This is the Word of God. Happy New Year!
THESE PROPHECIES WERE RELEASED ON 28 DECEMBER, 2019 BUT MADE AVAILABLE ON 5 JANUARY, 2020.
PROPHECY FOR THE WORLD:1. This year will be a year of HUMILITY. This year, the Lord will humble us with our challenges. Challenges can be affliction, arrogance, pride, wickedness or bad habits. To humble us with these is for those things to destroy us or expose us. Let us move closer to God.
2. Agriculture will help the economy because the economy will have a backlash. People should invest in agriculture. Let us farm to help the economy.
3. There will be a common medicine that will cause people to be ‘high’ to die, to commit suicide, to think of what can lead to death. The governments of each nation should watch out and put a check on pharmaceutical drugs that come to their country.
4. America should invest more in agriculture because their economy will be affected. The economy they see today will be affected, so they should invest in agriculture and encourage their farmers. Also, approach to the security issue will affect the candidates and swing voters in the next election. It will be tough in the election. They should pray against a recount. It may be too tight.
5. Let us pray for the Nigerian government to be able to finish this year without an interlude that will cause a situation of for and against. Join me in praying for my nation.
6. Vice President, it is not yet over. Expect much more pressure. The pressure will be so much. I pray you will be able to stand the pressure. We join you in prayer.
7. Many sicknesses and diseases that leaders have been treating privately will surface this year. Prophet TB JOSHUA Released 2020 Prophecy That Shock The Whole World (Watch Video) will become bedridden and many will not make it.
8. Russia should pray for their leader to avert his being on the sickbed. Something will surface. There is a ladder to go up – if this is averted.
9. An incident will happen to the nation Iran that will cause panic throughout the world. We are praying to know the mind of God concerning this.
10. Work of God – people will be getting tired this year because the work of God is not by power and might; because of so many challenges, tribulations and burdens they will not be able to bear.
11. United Kingdom – there will be agitation from a section that wants to leave; that will become an issue. Also, pray for the Queen and Duke of Edinburgh against going in and out of the hospital; pray for God to give them revival. Pray for unity and understanding among the Royal Family – because of what I am seeing. Brexit needs more time to stand on its feet – with more co-operation of the EU leaders. If not, there will be economic repercussions and the cost of things will become unbearable. With time and preparation, all will be well.
NOTE: THIS IS JUST PART ONE. PART TWO WILL BE RELEASED AFTER THOROUGH CONFIRMATION FROM GOD.
You can also Watch the Prophecy Below:-