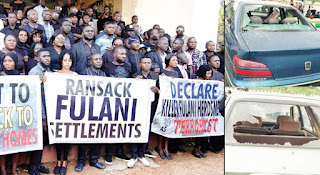 The Middle Belt Forum has endorsed the arrest of Fulani Ardos and other community leaders in Bokkos, Riyom and other areas over the latest killings in parts of Plateau State.
It asked the state Governor Simon Lalong to ensure the prosecution of the perpetrators of the attacks in Kwatta village in Bokkos Local Government Area in which 13 persons were killed and many others wounded.
MBF National President, Dr Bitrus Pogu, in a statement in Abuja on Sunday, noted that the arrest of the community leaders would open new vistas in understanding the dynamics behind the mindless bloodshed and destruction.
Pogu stated, “We urge Governor Lalong to spare no effort in bringing the perpetrators of these devious murders to justice. When criminals are not brought to account for their dreadful crimes, they get emboldened and continue in their evil to the detriment of peace.
“We are encouraged that the order to arrest Ardos and other community leaders is capable of opening new vistas in understanding the dynamics behind these mindless killings and destruction.”
While commiserating with the people of Plateau State, the forum pointed out that the gory assaults on the local communities had caused enormous sorrows and cast ‘dark clouds of frightening uncertainties in the skies’ for the besieged populace.
It advised the governor to curb the continuous assault on the people by establishing a security outfit similar to the Western Nigeria Security Network codenamed Operation Amotekun to arrest further deterioration of the security in the state.
“We believe that an outfit such as Amotekun and Join Task Force comprising local vigilante groups and security personnel, as practised in the North East can go a long way in protecting our people from the murderous activities of terrorists and criminal gangs,” the MBF observed.