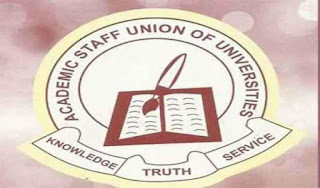 Lazarus Maigoro, the chairman of the University of Jos chapter of the Academic Staff Union of Universities (ASUU), has said that lecturers can not enroll into the Integrated Payroll Personnel Information System (IPPIS) because it violates the university Act 2003. Maigoro said in an interview with News Agency of Nigeria (NAN) on Tuesday in Jos that the policy did not fit into the university system. According to Maigoro, the law establishing all federal universities had bestowed on governing councils of the institutions the powers to administer over its administrative, financial and personnel matters. He noted that government could only change the status quo if it goes back to the National Assembly to repel the existing laws to accommodate the new policy. ADVERTISEMENT HOW OVER 5000 NIGERIA MEN HAVE PERMANENTLY OVERCOME TERRIBLE BEDROOM PERFORMANCE DUE TO THIS RECENT DISCOVERY BY MEDICAL CONSULTANTS He threatened that members of the union would down tolls and proceed on a nationwide strike if government insisted on implementing the IPPIS policy. ADVERTISEMENT SURULERE MAN REVEALS NEW HERBAL SOLUTION THAT REVERSES WEAK ERECTION AND HELPS LAST UPTO 48 MINUTES IN BED WITH NO SIDE EFFECTS “Why we can’t accept IPPIS is because of the retrogressive nature of the payment platform to the peculiar nature of the university system. “Actually, IPPIS violates the university Act of 2003, where the governing councils are supposed to be the ones to administer over the administrative, financial and personnel of every university. “With IPPIS in the university, it means government is taking all the functions of councils off them, without resorting to the National Assembly to repel the existing law. “We have taken our stand on this matter; we insist that the laws of land must not be violated. “But if government goes ahead with its plan, we will have to down tools; we will also not work,” he said. Maigoro explained that the union, at its National Executive Council (NEC) held in Minna, in December 2019, had made its position known to government on the IPPIS matter. He said that the University of Jos chapter of the union would abide by any decision taken by its national body. “We in university of Jos are in line with the position of our national body. We are not accepting IPPIS,” he said. (NAN)