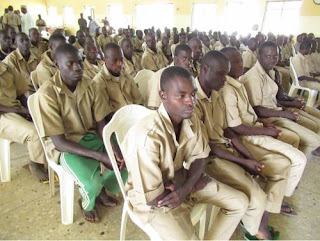 The lawmaker said this while addressing journalists at a press conference in Abuja on Tuesday.
Senator Ibrahim Gaidam, sponsor of the bill that seeks to establish an agency for the rehabilitation of repentant Boko Haram members, has said his goal is to reintegrate such persons into mainstream politics in Nigeria.
The lawmaker said this while addressing journalists at a press conference in Abuja on Tuesday.
Gaidam said, “The agency when established will help rehabilitate and reintegrate the defectors, repentant and forcefully conscripted members of the insurgent group Boko Haram to make them useful members of the society and provide an avenue for reconciliation and promote national security.
“It will also encourage other members of the group who are still engaged in the insurgency to abandon the group, especially in the face of the military pressure and enable the government to derive insider-information about the insurgency group for greater understanding of the group and its inner workings.
“It will enable government to use the defectors to fight the unrepentant insurgents. It will help disintegrate the violent and poisonous ideology that the group spreads as the program will allow some repentant defectors or suspect terrorists to express remorse over their actions repent and recant their violent doctrine and in the long run, re-enter mainstream politics, religion and society.
“The agency would also help to combat future recruitment into the insurgents group. If defectors told their stories and were made more public, their experiences would play a key role in countering Terrorist propaganda, which in turn would lessen the appeal of joining the group.
“In view of the fact that the Boko Haram insurgency is becoming increasingly aggressive since its inception in 2009, marked by extreme brutality and explicit targeting of civilians, it has become necessary for us to go back to the drawing board and adopt an alternative approach, in addition to the military option which has so far performed significantly well.
“There is no doubt that many members of the insurgents’ group have defected and many more are willing to repent given a window of opportunity and this is confirmed by many organisations including NGO’s that have unalloyed access to the Boko Haram.
“There is the need for a more strategic and comprehensive approach to entice those members of the group who, after realising the futility of the course they are pursuing have eventually decided to voluntarily lay down their arms and chose the path of peace. Hence, the need for the establishment of the National Agency for the Rehabilitation, De-radicalisation and Reintegration of Repentant Insurgents to accommodate the defectors.”