See what Nigerians did to Bob Bobrisky in Dubai [video] 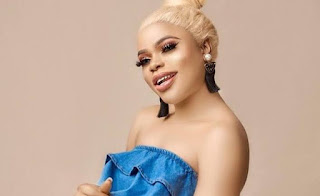 Male barbie Bobrisky has been spotted on the streets of Dubai
– The male barbie was seen in a video being embarrassed by Nigerians in Dubai
– In the video, the Nigerians were heard booing Bobrisky as he walked by
Popular Nigerian male barbie and cross-dresser Idris Okuneye, known as Bobrisky, has been seen in a video making rounds on social media. The cross-dresser was seen walking on a street in Dubai, United Arab Emirate.
Bobrisky was dressed in a beautiful red flowing floor-length gown. He also paired the looked with a long low ponytail silky straight hair.

In the video, the cross-dresser who was walking and minding his own business with his friends was embarrassed by some Nigerians in Dubai.
The Nigerians were heard booing the male barbie in the video. They kept on screaming his real name and calling him names in Yoruba language.
Naira Marley shares video of him hanging out with British boxer Tyson Fury to celebrate his recent victory
Bobrisky walked by not reacting to their comments and his friends also pretended not to hear the men shouting.
The cross-dresser was in Dubai for an event he was invited to. He attended the launch of a salon by a Nigerian vendor, who he celebrated and congratulated in a video. He also revealed that the vendor was opening her second salon in Dubai.
Meanwhile, Legit.nghad earlier reported that the popular Nigerian cross-dresser recently made his fans happy after announcing that he plans to launch a reality television show .
Bobrisky revealed his plans on social media. In a post shared on his Instagram page, Bobrisky revealed that his reality television show would be starting soon. He explained that he made the decision after his fans asked to see more of him.
Lagosians scoop fuel as tanker reportedly falls in VI (video)
According to the socialite, the reality show will start in Nigeria and then he would join pop singer Reprudencia Sonkey, popularly known as Dencia, in Los Angeles, California in the United States. Bobrisky added that he needs a good team to help him with the filming.