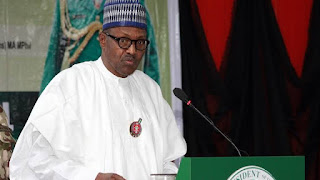 President Muhammadu Buhari on Tuesday expressed willingness of his administration to implement the decision of the tripartite committee, made up of Nigeria, Benin and Niger, on the partial closure of the country’s land border as soon as the report is received.
A Presidential spokesman, Garba Shehu quoted the President as saying so while speaking at an audience with Bashir Mamman Ifo, outgoing President of the ECOWAS Bank for Investment and Development, EBID, and his successor, Dr George Nana Donkor, in the State House.
President Buhari explained that the partial closure had given Nigeria a number of insights.
‘‘We have saved millions of dollars. We have realised that we don’t have to import rice. We have achieved food security.
‘‘We have curtailed the importation of drugs and proliferation of small arms which threaten our country,’’ the President said.
President Buhari thanked the outgoing ECOWAS Bank President for the improvements recorded in his eight-year tenure and urged his successor to build on those achievements.
The outgoing bank chief informed the President that the bank had been transformed from loss-making to profit, with commitments from ECOWAS member-states doubling to 1.4 billion dollars.
Mr Donkor, the incoming president, thanked the Nigerian leader and its people for their support in his emergence.
‘‘Without Nigeria, I could not have emerged,’’ he said.
He gave credit to President Buhari’s economic strategies captured under the Economic Recovery and Growth Plan, ERGP, noting that it has brought about economic recovery, stability and food security in the country.
He pledged total commitment to partnering with Nigeria towards achieving rapid development in the country and the rest of West Africa.