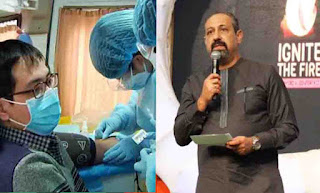 The Centre Manager of the Lagos State Biobank, Dr Bankole Akinwale, has disclosed that the Italian, and only person who tested positive for coronavirus in Nigeria is fast recovering and eating a local meal, “Amala”.

Mr Akinwale made the disclosure Tuesday, during a briefing and sensitization of religious leaders on Coronavirus and other communicable diseases, organized by the State Ministry of Home Affairs, at Christ the Light Chapel, Alausa, Ikeja.

“With no other confirmed case, the index case is doing well. Our patient is doing well as the viral dose is dropping, and his appetite increasing, from our follow up samples,” he said.

Mr Akinwale also stated that they had decontaminate the hotel where the Italian lodged and are still tracing the contacts and following upon them.

According to him, the essence was to break and stop the spread of the disease.
He also highlighted that the state government has renovated the wards beyond the structures and created about 10, each isolation wards to take care of over 100 patients, in case there was overflow.

“We have also prepared each of the general hospital to have reserved area in case of overflow, we have mobile clinics that can take up to 30 persons,” he said.

While assuring that the two fresh suspected cases of Coronavirus patients recorded between Monday and Tuesday at the Disease Control Centre, Yaba, had been put under control, Mr Akinwale said a Chinese who was taken in earlier Tuesday has been released after testing negative to the disease.
Mr Akinwale further assured that there was no cause for the alarm over the fresh cases, saying there were enough facilities to handle the situation.
Mr Akinwale also expressed concern over anxieties among residents on every manifesting symptom as suspected Coronavirus case.
According to him, “A lot of things are flying in the social media, but the Lagos State Government has been so active and had prior to the latest development, established the incident command system cost over $ 4 million, in collaboration with Canadian government.”