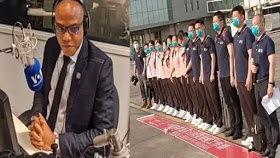 Leader of the Indigenous People of Biafra, IPOB, Nnamdi Kanu, has come up with some claims regarding the presence of Chinese doctors in the country.