US Firms Tried To Get Own Med. Equipment Out of China but Chinese Kept It All for Themselves 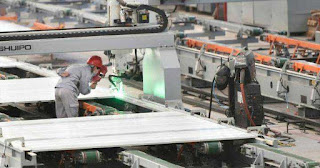 A worker watches over a machine as it welds aluminum at a factory in Zouping in China’s Shandong province on March 14, 2020. (STR / AFP via Getty Images) STR / AFP via Getty Images
China should be on its knees expressing remorse for the virus that emanated from its shores and infected the entire world.
But that is not what they did. The Trump administration claims that, rather than groveling for forgiveness that they do not deserve, they hoarded personal protective equipment.
These are the things like N95 masks that American hospitals desperately need but which China stopped American companies with factories on its soil from exporting, the New York Post reported.
A senior White House official said the measures were part of a play by China to “corner the world market” on PPE.
Now the Trump administration is considering working “through the United Nations” or lodging a complaint with the European Court of Human Rights.
“In criminal law, compare this to the levels that we have for murder,” Trump campaign senior legal adviser Jenna Ellis said.
“People are dying. When you have intentional, cold-blooded, premeditated action like you have with China, this would be considered first-degree murder.”
The White House was informed by executives from 3M and Honeywell that China had started blocking the export of booties, gloves, N95 respirators and other PPE in January.
Simultaneously, the regime imported nearly 2.5 billion pieces of “epidemic prevention and control materials” from Jan. 24 to Feb. 29.
“Data from China’s own customs agency points to an attempt to corner the world market in PPE like gloves, goggles, and masks through massive increased purchases — even as China, the world’s largest PPE manufacturer, was restricting exports,” the White House official said.
Faced with a shortage of masks, President Donald Trump used the Defense Production Act to force 3M to make N95 respirator masks for the Federal Emergency Management Agency.
That had to be done because China was hoarding the supplies, according to U.S.-China Economic and Security Review Commission founding member Michael Wessell.
“We understand that China has engaged in policies to try and not only develop its own capabilities, but to do so at expense of producers around the world,” Wessell said.
“At a time when demand was rising to deal with the crisis, China was marshaling all of the products for its own use,” he added.
“Some of China’s actions are probably illegal, but to bring cases when you’re in the middle of the crisis does little good for the patients who are in the hospital on ventilators — and might not have been there had they had access to PPE.”
Wessell is correct, but the broader point to keep in mind is that this is the status quo when you deal with communists.
If you choose to manufacture in a communist nation, you should never believe that you have control of your product.
Communism has no room for the individual. Everything is done for the state.
It is time that these American companies take notice and consider bringing their manufacturing back home to create American jobs and protect our nation’s security.
Never again should the well-being of our citizens be at the mercy of a nation that is not our friend.