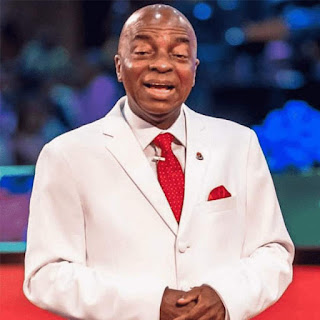 Bishop David Oyedepo of the Living Faith Church, also known as Winners Chapel, has kicked against the bill to make COVID-19 vaccines compulsory in Nigeria.

We reported that the bill was co-sponsored by the Speaker, Femi Gbajabiamila, Reps Pascal Obi and Tanko Sununu.

Gbajabiamila’s Bill has since generated a lot of controversies, with critics saying that some of the provisions in the bill appear “draconian.”

The Coalition of United Political Parties (CUPP) had also alleged that lawmakers had been offered $10million to pass the Bill.

Speaking at the Church communion live broadcast , Oyedepo said gang-up agents of the devil were trying to bring a flood of evil upon humanity.

He further stated that something evil was being schemed by some individuals and that people perpetrating it don’t know why.

“You don’t take vaccines, you don’t go outside the country! How? Where is it coming from?

The cleric, however, maintained that anything that troubled God’s agenda will be troubled, adding that his outcry over the closure of churches was for the kingdom of God.

“It’s over!! Whatever troubles God’s agenda will be troubled. The most valuable asset to God is the human life.

“If you see me screaming and crying: it’s for the Kingdom, absolutely so. You mean you keep God’s people, block their access to spiritual food for 4 weeks, 5 weeks, 6 weeks, 7 weeks and you are going to the market, buying and eating with 10 fingers. You kept students from school.

“This is an imported virus, how has it become our own? Why must we now have it?

“There is something going on here! Something evil is being schemed by some individuals and those who are perpetrating it don’t even know,” he further stated.