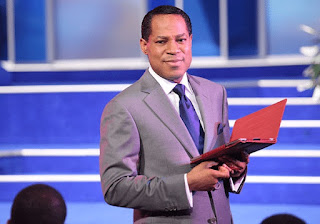 Pastor Chris Oyakhilome
Pastor Chris Oyakhilome, the founder of LoveWorld Incorporated, also known as Christ Embassy, has been sanctioned in UK over his controversial comments on COVID-19 and 5G.The Office of Communications, commonly known as Ofcom, sanctioned Loveworld Television Network, the United Kingdom-based station belonging to Pastor Chris Oyakhilome, over his comments on the outbreak of Coronavirus.Oyakhilome had on April 7, 2020, while commenting on the link between 5G and Coronavirus said;“With the classification of a weapon, 5G technology is very dangerous.“When it comes into contact with a human body, it can provide some poisons to the cells because our bodies try to fight the radiation, kicking out some protein and some DNA cells in a form of a chemical, which is called a virus. This shows that what’s killing people is not Coronavirus but 5G.”Ofcom, held that Loveworld News and comments by Chris Oyakhilome featured potentially harmful statements about the pandemic and adequate protection was not provided to viewers, adding that his statements were not presented with due accuracy.Announcing the sanction, Ofcom, the government-approved regulatory and competition authority for the broadcasting, telecommunications and postal industries of the United Kingdom, wrote;“We have sanctioned Loveworld Limited, licensee of religious channel Loveworld, for breaking broadcasting rules.A news programme and a sermon broadcast on the channel contained potentially harmful and unsubstantiated claims about causes of and treatments for Covid-19.The broadcasts linked the pandemic to 5G; said that it was the subject of a ‘global cover-up’ and presented hydroxychloroquine as a proven ‘cure’.
These claims were potentially harmful and made without adequate protection.
There is no restriction on broadcasting controversial views which diverge from, or challenge, official authorities on public health information.
However, they require adequate protection. These broadcasts risked undermining viewers’ trust in official advice with potentially serious consequences for public health. We have directed Loveworld Limited to broadcast statements of our findings, and are considering whether to impose further sanctions.”The regulatory company held that Oyakhilome breached Rules 2.1 and 5.1 of the Broadcasting Code, thereby imposing a sanction while considering whether to impose any further sanction.

Ofcom ✔@Ofcom
We have sanctioned Loveworld Limited, licensee of religious channel Loveworld, for breaking broadcasting rules.A news programme and a sermon broadcast on the channel contained potentially harmful and unsubstantiated claims about causes of and treatments for Covid-19.