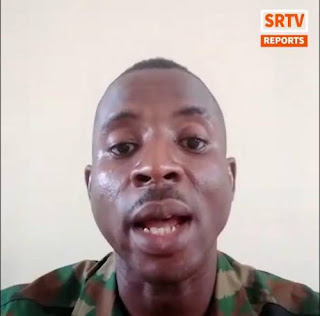 Reps Move To Rescue Buratai’s Critic, Lance Corporal Martins, In Military Detention
Also, the House asked that “ldakpein should be brought before the relevant House committees and the leadership, to brief them of the happening in the northern part of the country.”

At the process to rescue a soldier, Lance Corporal Martins Idakpein, who was detained for criticising the service chiefs over the rising spate of insecurity in Nigeria.
At the plenary on Thursday, the Minority Leader, Ndudi Elumelu, moved a motion to call for Idakpein’s rescue, Punch reports.It was titled, ‘A call on the Nigerian Army to release Lance Corporal Martins Idakpein from arrest based on His expressed opinion.’
ldakpein, from the 8 Division, Sokoto, of the Nigerian Army, had criticised the Chief of Army Staff, Lt. Gen. Tukur Buratai, and other service chiefs in a viral video over the handling of the Boko Haram insurgency.
Subsequently, ldakpein was arrested and moved from Sokoto to Abuja. His wife, Victoria, was also arrested after she granted a media interview, calling for the release of her husband.
Elumelu said, “The House is disturbed that though Section 122 of the Armed Forces Act forbids the military from perpetually detaining any officer, Lance Corporal Martins ldakpein, has been held in detention till date and his wife who tried to secure his release has also been detained.
“This is an affront to the letters of Chapter 4 of the 1999 Constitution of the Federal Republic of Nigeria as amended, which guarantees the fundamental human rights of citizens
The House mandated the Committees on Defence and Army to “investigate the alleged detention of Lance Corporal Martin’s ldakpein and his wife.”
Also, the House asked that “ldakpein should be brought before the relevant House committees and the leadership, to brief them of the happening in the northern part of the country