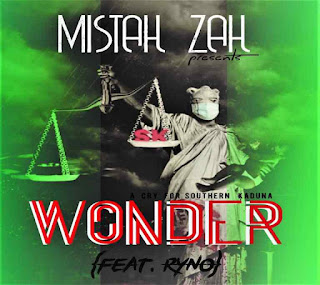 Kaduna’s infamous underground rap act, Mistah Zah, together with J Town’s prolific, Ryno, teams up to explore on the themes of social bafflement and political disillusionment.
The two men team draws inspiration from the daily public distress while alluding that to the current southern kaduna ordeal.
In the song, Ryno renders a catchy hook on the pop/trap beats where he expresses his bafflement with the current situation as he wonders in his thoughts. He “wonder wonder wonder” so much such that the situation got him thinking aloud. The “Mazaje” singer uses a monotone voice to stitch two pulsating and daring rap verses from the eloquent Mistah Zah whose delivery settles on an activism rather than conventional rap about delusional self-aggrandized lifestyle.
Advertisements
The song is in per with mater of fact events as they unfold, and it offers listeners a moment of reckoning and reflection on the basic disabilities of the system they found themselves in.
It is a call for justice so to speak; a demand for readjustment in those areas such as social constructs and also an unregretable but silent ridicule of the entire system. A keen listener on first hearing called it a “pure work of lyrical satire”.
Music such as this is rare, given the fact that it is a daring result of hiphop spiced with a touch of pop to appeal to the interest of listeners who are more conversant with the role of hiphop to be only a product of street ruffians.
Download here!