This An Established Fact, Davido Produces The Best – Review@davido@mayorkun 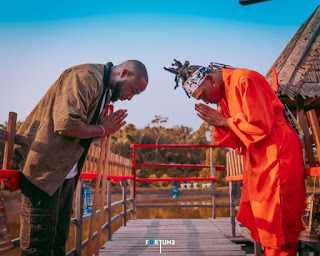 For Davido Production Is Always 5 Star, The Standard Must Never Drops – The Best Video Review

The Review, Creating a beautiful sound in a dark studio is one thing, translating that music to an appropriate video is another thing, Davido ’s “The Best” featuring Mayorkun is a song from his 2020 album “A Better Time” 2020.

When this song became a favourite an almost outshine the buzzing song “FEM” at that time and also position Mayorkun as a gifted artist, It is no brainer that a video for the song will be released. Making an appearance is the legendary Wande Coal and it’s directed by Dammy Twitch.

The video opens to a cool scenery of nature and then we see a Samaria which is obviously The Mayor Of Lagos Mayorkun. Immediately following suits are clips of Sumaria life that we would see as the music video on folds.

As I watched I wondered why Davido and Dammy Twitch will choose to channel Samurai and Ninja life. There is the risk of cultural appropriation and the obvious fact that this song doesn’t talk about any of the obvious values of Samurai living. As I watched the video in mute, I saw a story of a young man (Mayorkun) in search of something, he finds it but he has to fight for it. At his first attempt he gets beaten up, then he goes to get the required skill to be a better fighter. He comes to a grand patron (Davido) who teaches him and he goes back to fight and this time he wins simply because he learnt from the best.

“Nwannem I come from the ghetto” somehow this line makes me see the video in another light. Somehow the Samurai culture is appropriate. Blame the movies I have watched but in some of them the Samurai kid often comes from a place of low standing (standard) in the society and later becomes the hero. Mayorkun the kid from the ghetto with a scroll in hand, is on a journey in search of something, a girl I presume. This girl represents Mayorkun’s musical desire, as we see in the video that she holds a trumpet. Upon seeing that the girl is the exact replica of what is on his scroll {his desire) he starts talking to her. When Mayorkun shows her the scroll she begins to play as if Mayorkun showed her a music sheet. This further interprets Mayorkun’s desire to “blow” in the industry. He met with a challenge almost immediately. A group of karate kids punches him. These Karate kids can be said to be other music acts in the industry who feel Mayorkun can not come from behind and start having big talks or big dreams. Which is the every other day story of life. You find what you want and then many issues come your way which makes you want to quit and farther but if you stay on the grind without giving up and true to yourself with a good mentor then you emerge the best. Mayorkun meets Davido who takes him under his wings and teaches him everything “You see I learnt from the best o (the best), Davido, sho get o” 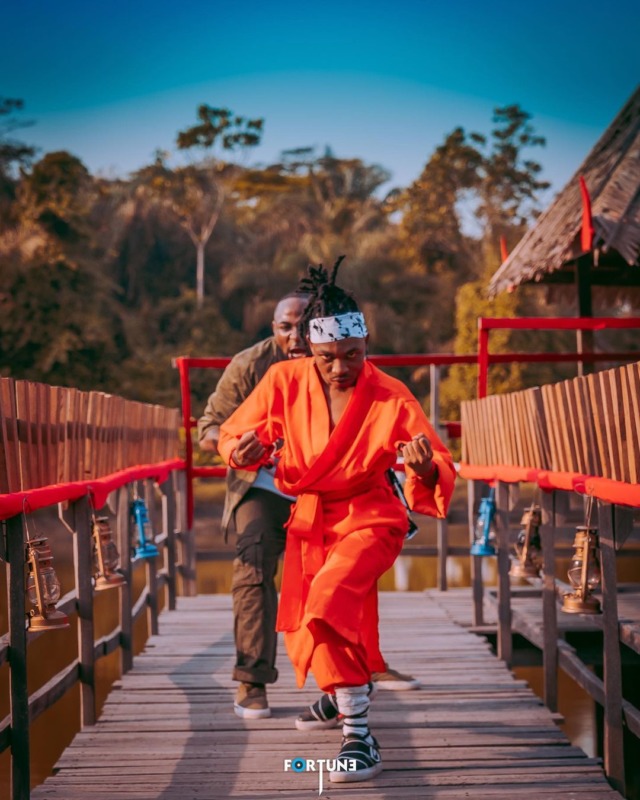 The costume for this video was well executed. The Geisha dressing, Samurai with his sheath sword and Karate robe and the Asian conical hat costume was done right. The colour chosen was right with the theme of the Japanese Samurai. There was no overlapping of Japanese and Chinese writing in the inscriptions that surrounded the scenery in the video and very importantly the songs and mouthing of words were in sync.

Watching a video without any form of male gaze in today’s world of Buss It and Silhouette Challenge is quite refreshing. There is not one scene of unnecessary nudity or sexual charged dance. I wonder if this is a new trend Davido is trying to set judging from “Fem” and “Jowo”, music videos. If it is, I would like to say it is one that is refreshingly welcomed.

With an unending contention of who the best in the industry is, it is quite important that Davido sets himself as the grand patron and not a man in the battle field, a subtle well crafted way of saying he is above the playing field of comparison. He trains the apprentice well so that at his one punch, whoever doubted his abilities gets on the floor. To be honest Mayorkun is a gifted artist and his music upon release almost throws out whatever song is trending. Davido’s desire to see Mayorkun become the very best that he can be, I guess is what inspired the song and its title. This is the story of Mayorkun and not necessarily Davido calling himself “The Best”. When Mayorkun got back to the same field where he was sent out upon entry, he is no longer the shy kid, he is not unsure, he is now dressed right and ready to battle.

This video also says Mayorkun under Davido’s tutelage will soon clear the big wigs and stand tall as a legend. I appreciate that this song was not Mayorkun featuring Davido because it would have been interpreted as Mayorkun being conceited.

This video is a clean crisp well edited creation of Davido and Dammy Twitch. Davido has been known to give good music videos to his studio creation and he is not slowing down. The storyline of the video and the lyrical content was a good match and I believe Davido’s intentions for this song was well captured. This video does deserve a 5 out of 5 stars.