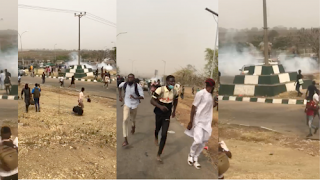 Operatives of the Nigerian army have attacked students of the University of Abuja staging a peaceful protest against hike in tuition fee and other issues at the entrance of the school.

SaharaReporters gathered that the soldiers fired tear gas at some of the peaceful protesting students and used batons to pummel others.

“Nigeria is now a country full of tyranny. The Vice-Chancellor brought armed soldiers to disrupt a peaceful protest by unarmed Nigerian students. When did protest become a crime in Nigeria? We won’t take this,” a student told SaharaReporters.

The students had earlier blocked the main campus gate in the Giri area of the Federal Capital Territory, over the increment of their tuition by the school authorities.

The students, led by their union executives, displayed various placards, saying the school authorities led by the Vice-Chancellor, Prof Rasheed Na’Allah, increased tuition by over 100 per cent.

They therefore described the increment as insensitive to the plight of Nigerians.

On social media, the students have created #EndUniabujaOppression, calling on the school management to rescind its decision and open the portal for students to register.

One of the Students’ Union Government leaders explained why the students embarked on the protest.

He said, “Sometime in late 2019, rumours were going around about a purported increase in school fees at the university. As a proactive SUG, led by Aluta Famous, enquiries were made in which the VC, Prof. Na’Allah, blatantly denied any possible increment and so there wasn’t much to do by the SUG.

“Some days after, students kept complaining about the fees on their portals and this prompted the SUG to meet with the VC again. This time around, the VC didn’t deny but intimated the SUG about an agreement reached with their predecessors (led by Aluta Standard) on the increment.

“The SUG was disappointed about the development and couldn’t come to terms with why their predecessors could have agreed to the increment, taking into consideration the fact that the fees had just been increased a year before then.

“However, the SUG pleaded for reduction, only for the management to say some students had already started paying and that the money could not be refunded. Not only that, the management also insisted on giving a deadline for payment and registration, an act that’s alien to the students’ community since the previous management had always given students the grace of paying as late as in the second semester.

“This sudden increment and refusal to be considerate and sensitive enough to show empathy to struggling students has led some students to drop out because they could not meet up financially. True to his word, the VC closed the portal for payment. Then, there was the pandemic break and a strike by the Academic Staff Union of Universities. Since there was news of possible resumption and examination dates set, SUG has been pleading for the portal to be reopened so as to allow students to register.

“In light of this, we are calling on all well-meaning Nigerians to come to University of Abuja students’ aid and not allow this obvious oppression and intimidation of students to go without a proper redress. Our future is at stake and we won’t fold our hands and watch as it is being delayed.”

On many occasions, men of the Nigerian Army have been accused of various forms of human rights violations by Nigerians and international actors such as Amnesty International.

In 2015, over 330 Shia sect members in different locations controlled by their leader Sheikh Ibrahim El- ZakyZaky in Zaria, Kaduna State were killed by soldiers.

The army claimed its confrontation with the Shiites who had erected a makeshift roadblock near a mosque resulted from an assassination attempt on former Chief of Army Staff, Tukur Buratai, whose convoy was passing by.

An unconfirmed number of peaceful #ENDSARS protesters were also killed by soldiers at the Lekki Toll Gate on October 20, 2020.