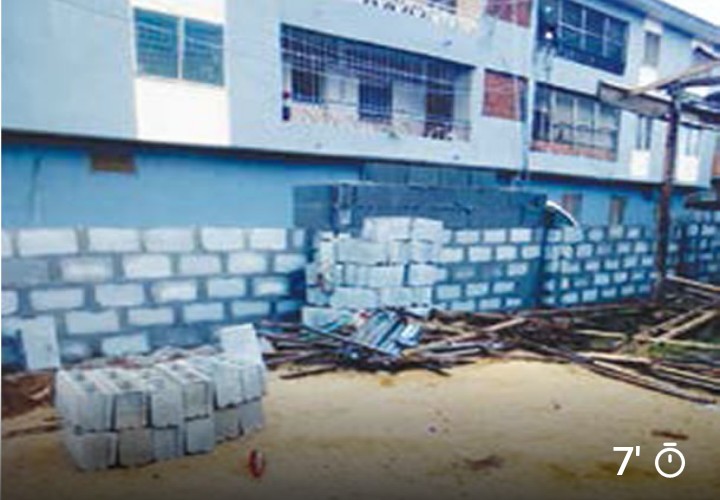 Samson Folarin A 75-year-old widow, Mrs Kehinde Agbetanmije, has lost her landed property on Adetayo Street, Alake, Ikotun-Idimu Road, after suspected hoodlums invaded the community on Monday. PUNCH Metro gathered that the men, numbering about 20, allegedly threatened to beat the woman’s daughter who demanded to know their mission. Our correspondent was told that bricklayers were quickly brought on the one plot, as they began erecting a fence around it. The woman’s daughter, Mrs Olayemi Oshinusi, who spoke for her, said efforts to get the police at the Idimu division to act on the family’s complaints were not successful. The 46-year-old noted that the police, despite collecting money from them, refused to visit the scene. She said, “My late father bought the land in 1977. It is actually two plots of land. He built a two storey building on one plot, and the second plot, he left as a garden. Both plots are fenced together. “We decided to put the land to use by giving it to people for business. First was an ice block trader, and later a bakery owner; both of them relocated after they got their permanent sites. “On Monday, we were called by people that some strange people were sighted on the land. They said the land grabbers were about 20 in number. I went there with my mother and saw they had started digging and mapping the land, including erecting a structure. When we tried to stop them, they threatened to deal with me and my mother and did not answer our questions.” They refused to do anything. Later, we heard that the people behind the whole thing had paid them. As I speak to you, the land grabbers have built a fence and created their own gate on the land. We have all the land documents, receipts, survey plan,” Oshinusi added. She said when an uncle visited the property with another omo onile, they were informed that a prince in the community was behind it. He identified him as Idris Balogun, aka Oluomo. She lamented the spate at which land was being taken over in the community, adding that several people lost their property to a syndicate in the area. The state Police Public Relations Officer, Muyiwa Adejobi, urged the family to report the case to the state Commissioner of Police, Hakeem Odumosu. He promised that the complaint against the officers who allegedly took money from Oshinusi would also be handled by the police headquarters. “We won’t condone such unprofessional acts of policemen should the allegations be confirmed. We assure her of justice in the matter,” he added. Idris, when contacted by our correspondent, denied sending hoodlums to the land, adding that another member of his family was in charge of the property. He said, “The place in question belongs to the Isheri Olofin family. Those who sold the land to those people are trespassers; the Isheri Olofin family got a judgement against them after 35 to 40 years in court. And the land in question is vacant. Anything that is vacant, the judgement overrules it.”According to Idris, the woman’s family does not have documents to back up their claims to the land.