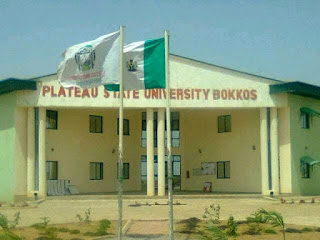 Following the recent Constitution of the High Powered Committee by Governor Simon Bako Lalong of Plateau State with the mandate to amicably tackle and resolve funding, welfare, staffing, pension, gratuity, promotion and other Sundry issues raised by the four staff Unions of the University, agreements were on Friday signed with two of the Unions after useful negotiations, understanding and resolutions were reached.

Speaking shortly after signing the agreements in Jos with the Non Academic Staff Union of Nigerian Universities, Plateau State University Bokkos, Chapter and National Association of Academic Technologist’s of the University, Chairman of the 7man High Powered Committee, Izam Azi commended NASU and NAAT for their understanding and cooperation which led to the timely, speedy and amicable resolution of the issues in contention.

He assured the Unions of the commitment of the state government to abide by the contents of the resolutions reached and urged the Unions to close ranks by collaborating with the management of the University to ensure the amicable resolution of any future matters internally.

Also speaking,Vice Chancellor of the University, Professor Yohana Daniel Izam appreciated the two Unions for their understanding and patience in reaching the agreements.

According to Professor Izam,no University progresses with an ill motivated workforce and commended Governor Simon Bako Lalong demonstrating concern and commitment by constituting the 7 man High Powered Committee to find lasting solutions to the problems bedeviling the University which had lingered since inception.

He said that the interface has allowed the Unions to make valuable contributions and inputs on how best to run the University praying that ASUUa and SSANU will also cooperate by facilitating the timely resolution of issues to ensure the smooth commencement of academic activities.

He also thanked the Committee for the success recorded so far and prayed for the timely resolution of issues with the remaining Unions.

In their separate remarks shortly after signing the agreements, Chairmen of NASU and NAAT, Comrades Jock Rwang Pam and Haruna Chundusu commended Governor Simon Lalong for the interest shown by constituting the Committee to resolve issues bordering on staff earned allowances, understaffing, underfunding, the new minimum wage, pensions, gratuity, promotions and proper placement which had lingered for some years.

They said the resolutions reached resulting in the signing of the agreements were products of collective bargaining with inputs of both the Excos and the Unions congresses.