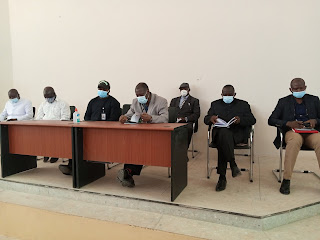 The Director General of Plateau State Health Care Contributory Management Agency (PLASCHEMA), Dr. Jenchang Fabong announced that the agency has granted express accreditation to Plateau State University Bokkos Health Centre as one of the approved centres to provide affordable healthcare services to staff and students of the University which will also benefit the host communities.

Speaking during the sensitization and advocacy visit to the University, Fabong said the enrolment of Plateau state citizens is mandatory and not optional saying the health scheme has tremendous benefits to both the workers and their families.

According to him, the agency was established in June, 2019 for the purpose reducing the burden of the state government in health care delivery efforts in line with the universal health coverage adding that for the Agency to effectively cover the state, various platforms of the programme were designed to enable different categories of people including vulnerable groups to benefit from the scheme.

The DG Said the Agency has enrolled over thirty six thousand people in last few days via a device they created which enabled them to reach the nooks and crannies of the state. He assured the Agency of cooperation of the management, critical stakeholders, Staff and Students of the University to achieve the mandate in health care delivery realising how important this component is to both the well being and productivity of staff of the institution

He commended the Vice Chancellor for the massive achievements recorded in the infrastructural development and welfare of staff.