Governor Nyesom Wike has alleged that there is a plot by the NDDC to remove him from office – Wike went as far as claiming that the commission is presently wasting N10b to achieve this evil objective – The Rivers governor further claimed that the NDDC is now run by politicians who do not have the interest of the people at heart The Niger Delta Development Commission (NDDC) has been slammed with a very serious allegation by the Rivers state governor, Nyesom Wike.  Wike has accused the management of the NDDC of wasting the massive sum of N10 billion in an evil bid to unseat him, Channels TV reports. He alleged: “What NDDC does through the supervision of their party is to make sure they vote out some money to ensure certain governors do not return.“You can imagine NDDC wasting ten billion to remove me here, is the money not wasted now?….. NDDC wasted ten billion naira to remove just one governor.” Governor Wike said the NDDC is wasting the sum of N10bn to unseat him Source: Facebook Speaking with the Senate committee on Niger Delta in Port Harcourt on Wednesday, February 24, the governor maintained that the commission has been taken over by politicians who want to achieve only their selfish agenda. The fiery and outspoken governor added that the NDDC is underperforming because it has placed politics ahead of service to the people of the region. Meanwhile, Wike had claimed that Nigerians were earnestly waiting for the Peoples Democratic Party (PDP) to take over power from the All Progressives Congress (APC) in 2023 “to enshrine good governance.” 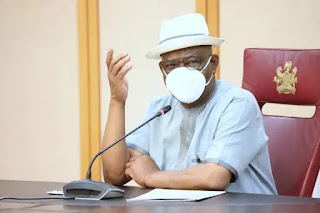