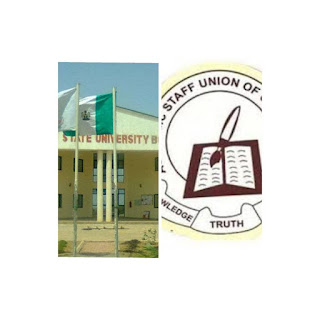 Recalled that ASUU of the Varsity embark on an industrial Action on January 15, 2021, and this had paralyzed activities at the institution for nearly two months, a development that prompted the state government to constitute a committee to look into the matter.

The Chairman of ASUU in the Institution, Dr Bentse Pamson told Journalist in Jos on Wednesday that the union decided to suspend the strike after reaching an signing and agreement with the government team.

“Yes, we have suspended the strike beginning from today(Wednesday), but with conditions, going by the experience of ASUU with the federal government that happily goes into an agreement with the union to do certain things but the commitment will not be there and it will take another strike for them to fulfill their own promise. We don’t want the Plateau State government to follow that path.” he Said.

While Highlighting the agreement signed with the state government which made the Union suspend the strike, theASUU chairman said,

“Before embarking on the strike in January, we raised the issue of the absence of ongoing capital projects in the university by the state government, but Plateau State government has agreed to commence the fencing of the University that was abandoned for years and also begin the construction of 30 units of staff quarters between now and June this year.

“The government also agreed to build hostels that will accommodate 70 per cent of our students on campus as well as construct the road network in the University. We wanted work on the hostel projects and the road network to commence immediately but Government said that because they were not captured in the 2021 budget, they should be left for the 2022 budget for capturing and execution.

“The government equally agreed to raise the monthly subvention to the University from N56 million to N100 million.

“On the Earned Academic Allowances owed our members totalling about N215 million, Government agreed to pay N70 million immediately and another N72.5 million later in October this year and the last batch remaining N72.5 million will be paid in October 2022.

“On our demand for the reconstitution of the University Governing Council, the Government has gone ahead to reconstitute the council while the negotiation was ongoing.

“So with the suspension of the strike, we hope that government will waste no time to inaugurate the council to start work immediately and also show commitment to the other agreements reached with the Union to enable the university bounce back to life.” He Ended.

In another development, the Student Union Government (SUG) President of the Institution Comr. Ezekiel Lautei has appreciate the ASUU leadership and an the entire members of the Varsity for their ability of understanding to suspend the strike in the interest of the students.

Comr. Ezekiel Lautei also appreciate the executive Governor of the state, for his Prompt action that lead to meeting the demands of the Lecturers.

The President made his reaction in a Press statement issued yesterday, he also appreciate the entire Students of the Varsity for Patriotic act during the struggle.