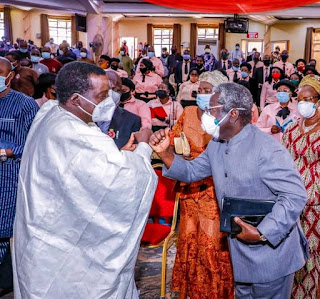 Plateau State Governor Simon Bako Lalong has felicitated with his immediate predecessor Dara Jonah David Jang on the occasion of his 77th birthday.

Governor Lalong in a congratulatory message described the former Governor as a patriotic Nigerian who has continued to serve Nigeria and Plateau State with passion and commitment.

Lalong recalled the contributions of Dara Jonah David Jang at various times during his career in the Nigerian Airforce and after retirement where he served as Governor, Senator among other responsibilities.

While wishing him many more years of good health, peace and God’s protection, Governor Lalong urged the elderstatesman to continue to offer his wealth of wisdom and experience towards the development of Plateau State and the nation.

Director of Press & Public Affairs to the Governor of Plateau State.