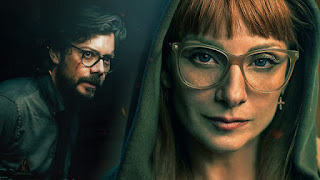 Money Heist’s (La Casa De Papel) journey on Netflix comes to an end in December 2021 with the arrival of Part 5 Volume 2 (or sometimes referred to as season 6, season 5 part 2, or just simply as the final season – however you want to call it). We’ve witnessed five incredible seasons of Money Heist, and below we’ll be discussing everything we can expect from the final season, keeping track of trailers, clips, and the Netflix release date.

The Spanish phenomenon has been one of the most polarising shows of the past five years, transcending the language barrier and entertaining tens of millions of non-Spanish speakers from around the world. While we still wait for the viewing figures from part 5, we do however know that part 4 ensured Money Heist became the most-watched non-English title ever when over 65 million households tuned in to watch within the first month.

The series has led to a huge expansion in Spanish content demand around the globe including dozens of upcoming Spanish-based projects. Bluper reports that the demand has led to a shortage in filming equipment in the country.

It’s been a long road of twists and turns, but we can’t wait to see what the final part of Money Heist has in store for us.

When will Money Heist Season 5 Part 2 be on Netflix?

The final part of Money Heist will be released on Netflix globally on Friday, December 3rd, 2021.

All the Trailers for Money Heist Season 5 Part 2

At the Netflix TUDUM event, we were treated to our first look at the final part of Money Heist. With the Professor mysteriously away from comms and the building still surrounded by Police, the heist crew argues over how to escape, and what to do with all the gold.

Then on October 13th, 2021 we got our first tease for the final season which was only a 42-seconds long clip.

The final (which is dubbed the official) trailer arrived on November 3rd, 2021 exactly one month before the final season arrives on Netflix.

It was accompanied by the teaser text:

“The world’s greatest heist comes to an end. Last season of Money Heist launching December 3rd, only on Netflix.”

have been many twists and turns throughout Money Heist, but sadly no one can take four grenades to the chest and survive. Tokyo’s sacrifice has given the crew more time, as she was able to kill Gandía, Sagasta, and the majority of the Special Force personnel.

Some fan theories suggest we will see the return of Tokyo in the final season. At the absolute minimum, we expect to see her character appear in a flashback or two.

Are all the cast returning?

As filming took place for the first and second volume together, all of the cast will be returning according to Marca.

There are also many more theories to explore that we can’t include here which are well worth reading. Fuera de Series has put together their top 7 theories going into the final season.

What is the episode count for Part 5 Volume 2?

The final part of Money Heist will release with five episodes. All are expected to be around the 50-minute mark.

With the final part of Money Heist dropping, there will be 41 episodes on Netflix in total.

Will there be a season 6 of Money Heist?

All good things must come to an end, but that doesn’t stop fans from being disappointed that one of their favorite shows is almost over.

Alex Pina, the creator of Money Heist, has addressed the end of the series in a number of interviews. Largely crediting moving on to new projects such as Sky Rojo.

The good news is that numerous spin-offs have been teased which we’ll dive into in a separate article.

Another large reason why the series is coming to an end is due to the demand of the cast. As Money Heist features an incredible ensemble, each passing season has only raised the popularity of the cast more and more. It’s extremely difficult to continue producing shows with a star-studded cast when they are in such high demand.

The good news is that we are going to be seeing at least one spin-off. Right now we only know about the Money Heist Korean spin-off which begins filming in 2021.

Also, if you live in a major city around the world, you may be able to take part in some of the pop-up Money Heist live experiences.